The Tranzalpine is one of the world’s great train journeys, and one of New Zealand’s most exciting, too: from Christchurch on South Island’s east coast, across the Canterbury region, up and over the Southern Alps, and down to Greymouth on the west coast. It was also one of our earliest morning starts: we had to leave the hotel at 0715 to get to the station in time to catch the early train.

The whole journey from Christchurch to Greymouth takes almost 5 hours, but we left the train at Arthur’s Pass to rejoin our coach (which had made the distance in less time) for the westward descent. We had still been able to enjoy the spectacular views from the train as it climbed into the mountains. We even saw snow – though not much of it – on the highest peaks. 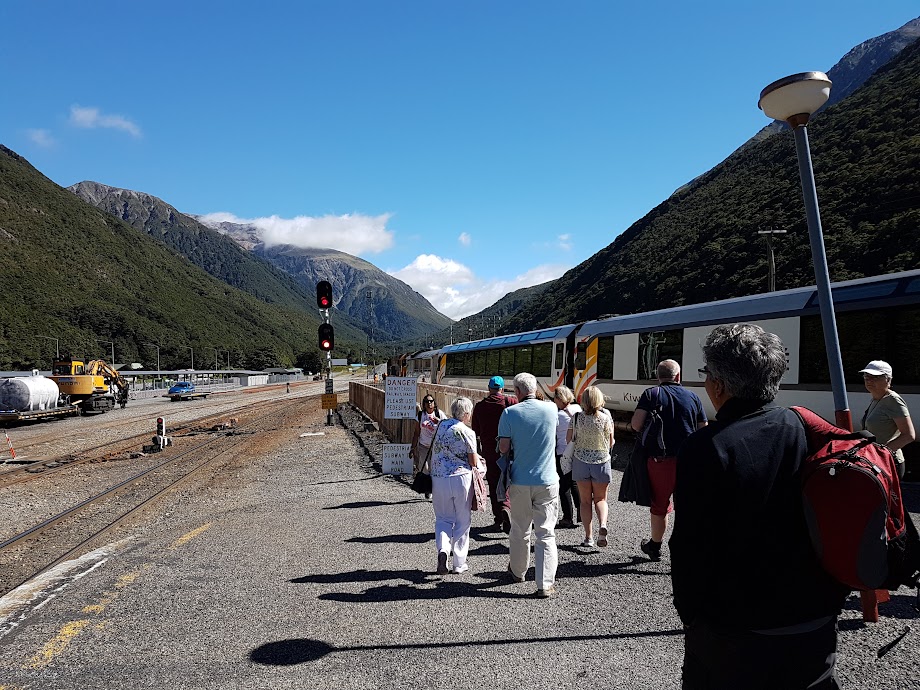 The descent by road was one of the steepest gradients I’ve ever been driven down, and I was happy not to be the driver, especially of a coach full of 51 people and their luggage. Our first stop was at Hokitika, now a small coastal town, but in the 1860s it was a bustling gold rush town, filled with prospectors from all over the world who had come to the west coast to make their fortunes. Eleanor Catton’s Man Booker Prize-winning novel The Luminaries is a fascinating mystery that also gives a picture of the town and the period.

Hokitika today is a centre for the traditional greenstone industry, but its major industry now is tourism. We had the best lunch here of any of our NZ travels, at the Aurora Restaurant where we shared a grilled chicken open sandwich – freshly prepared! unlike many of the plastic-wrapped lunchtime sandwiches we had eaten on other days – and some Bundaberg ginger beer.

After lunch our journey took us onward down the west coast highway to Franz Josef. Here we made our first unsuccessful attempt to get a helicopter ride to take us up onto the Franz Josef Glacier. First you have to be weighed so they can select a passenger manifest of the right total weight, and distribution in the helicopter. Then we even got as far as being allocated to groups, given wrist bands and taken through the safety instructions (main point: Always approach the helicopter from the front; never go anywhere near the tail end. Anyone who’s ever watched ER won’t need telling…) We were led out of the office and halfway across the road to the landing site, before the message came through that flights were cancelled because of poor visibility.

There’s not much else to see at Franz Josef, and not too many eating places (though a few more than Denis let on about…) so the whole party ate at The Landing.