The next day was another long day on the road which left us feeling tired and irritable. But what a day! An early start meant getting up at 0530 in order to leave the hotel at 0700 for the drive along the Eglinton Valley, and stopping briefly at aptly-named Mirror Lake, to our chief destination at Milford Sound in New Zealand’s glacier-carved Fjordland. Our Lonely Planet guide tells us that “the world-beating collage of waterfalls, verdant cliffs and peaks, and dark cobalt waters is at its best” on a clear, sunny day. “More likely, though, is the classic Fjordland combination of mist and drizzle, with the iconic profile of Mitre Peak revealed slowly through shimmering sheets of precipitation.” Well, we were the lucky ones: the weather was near perfect. 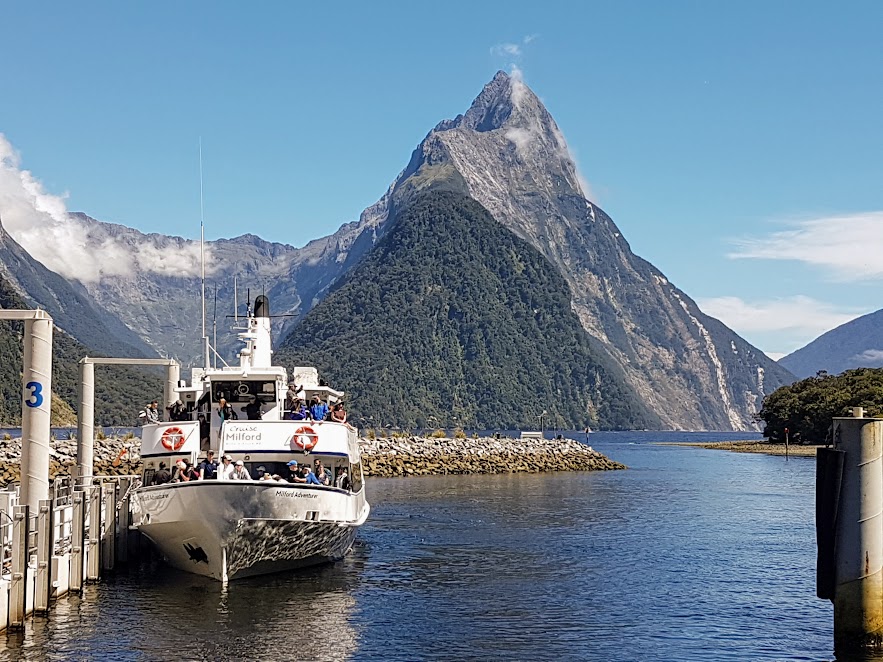 Lots and lots of photographs as the boat took us along the fjord and as far as the open sea, which we gazed upon, turned about, and returned into the calmer waters of the Sound. Captain Cook never actually discovered it, because his view from out at sea didn’t show it as a inlet at all. He just sailed on by, and missed a treat. “The fjord remained undiscovered by Europeans until Captain John Grono discovered it c.1812 and named it Milford Haven after his homeland in Wales. Captain John Lort Stokes later renamed it Milford Sound. (Source: Wikipedia) 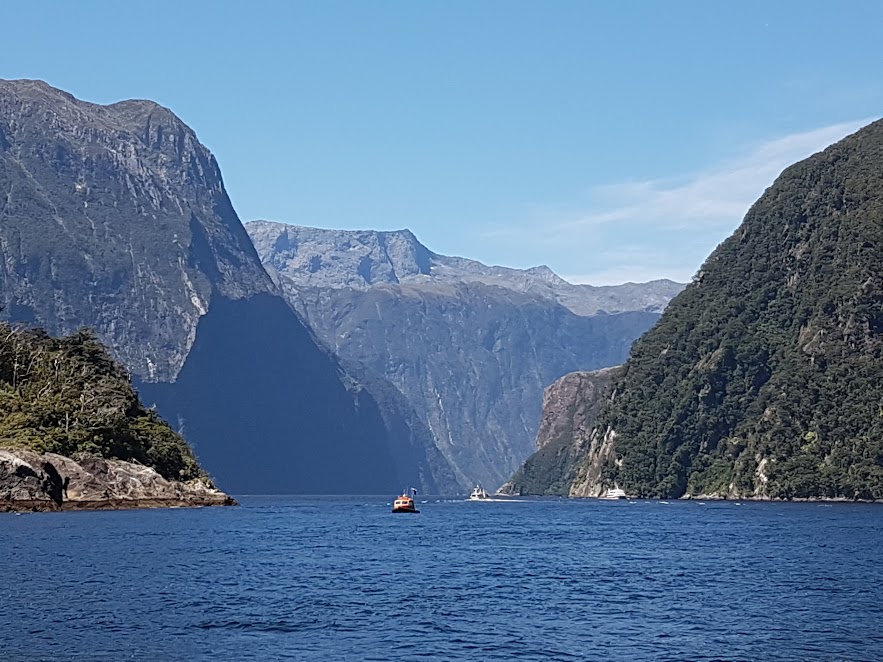 Apart from the scenery, there were also glimpses of basking seals. 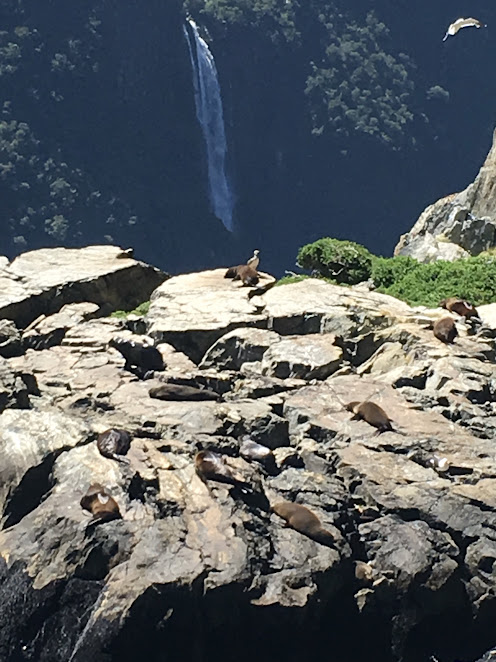 This is Alison’s picture. She was convinced that the bird in the background was a penguin. Me, I think it was just one of the seals getting dressed for a fancy dress party.

From Milford Sound, it was south again to the most southerly of all our overnight stays in New Zealand: Te Anau. Here’s where I faced and didn’t exactly overcome, but at least survived, one of my worst phobias. Alison really really wanted to visit the world-renowned glowworm caves. I thought I could do without. I do not like caves. I do not like them, Sam I Am. Perhaps it comes of reading Tom Sawyer as a child – those nightmare chapters in which Tom and Becky get separated from everyone else and are lost in the caves, and become convinced they’re going to die, and when they do eventually see a fellow-human being, it’s the terrifying Injun Joe… It’s the darkness, the sense of millions of tons of rock over your head… And don’t even get me started on the thought of potholing, and the crawling through narrow tunnels not even on hands and knees…

But in the end I went because Alison wanted me to, and she wanted to see the caves so much. It was worth a visit. But it was terrifying too: the noise of the rushing water, the walkways over drops into the abyss. Strangely enough, the glowworm part wasn’t alarming at all, even though it involved getting into a small boat on an underground lake (by this time, thankfully, we were away from the rushing of mighty waters), and then being moved along in total darkness by the guide pulling on a rope or wire or something. And then suddenly there are the lights of these strange creatures hanging in the blackness above and around you. It’s like nothing on earth. Naturally you can’t take any flash photos because it scares the poor worms to death, so you’ll either have to go there yourself, or do an image search (try Te Anau glowworm caves) with your favourite search engine. (Incidentally, I am currently using Startpage because it is “the world’s most private search engine”, and it also lets you view images, a feature that Google has just removed.)

I have faced one of my worst fears (-ish) and have survived.

When we got back from New Zealand, we wanted to watch or re-watch some of the films and TV series set in NZ, to enjoy memories of the places we’ve been. So we started with Top of the Lake on Netflix, filmed in and around Queenstown and Lake Wakatipu.

Let’s just say, it was a Disappointment. New Zealand noir just doesn’t suit our memories of the place. No doubt there are paedophiles, rapists, drug-crazed incestuous hippies, bent coppers, murderers, and gangsters in New Zealand. But thankfully we didn’t see them; and the country also prides itself on having relatively little crime. But apart from the crime, we couldn’t make much sense of the characterisation and motivation in the story. One minute people are having a violent showdown; the next they’re somewhere else entirely, and behaving as if nothing has happened. One minute they’re fighting and saying it’s all over between them; the next we see them having sex (again). I think there has been a second, more recent, series. We might give it a try, sometime. We’re a bit like Homer Simpson about that. Doh!

In TOTL, Queenstown is described as a “millionaires’ playground”. Which may be true. But it was still a great place for lots of other people who aren’t millionaires. There was so much to see and do, that our itinerary allowed us a “free day” there, to make our own choice from the smörgåsbord of possibilities. Alison and I had already, the previous evening, enjoyed our first meal in a Vietnamese restaurant – which cheered us up after our gruelling day on the road. On the “free day” we went different ways. Alison chose the Kiwi Birdlife Park, where she actually saw some kiwis in their special nocturnal environment. I opted for one of Nomad Safaris, which was not quite the all-LOTR safari that most of our little group of 5 were hoping for, but was very interesting all the same.

It took in Skippers Road, the “most dangerous road in New Zealand”, 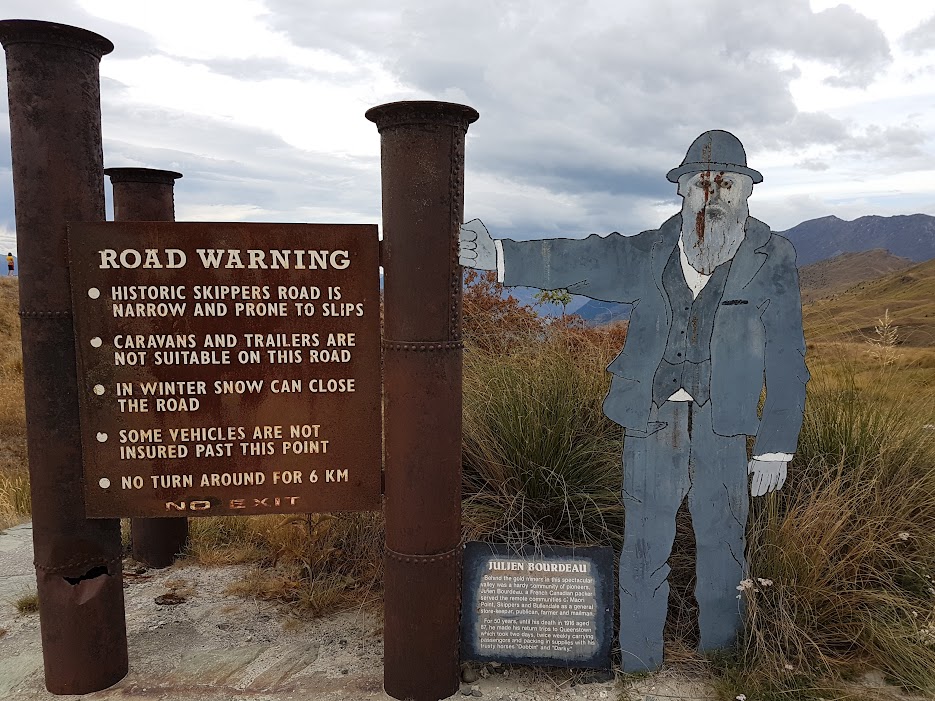 a single track dirt road winding up into the hills, with seemingly impossible passing places and sheer drops to the side. It’s the old road used by the gold prospectors of the New Zealand Gold Rush. One of those rides where you’re willing the driver to keep his eyes on the road, not keep looking round to see how his passengers are enjoying themselves… where you feel yourself automatically leaning away from the cliff edge as if you could stop the landrover from falling off the road…

It also took us to Arrowtown, one of the old gold rush towns, and to the Arrow River to try our own hand at panning for gold. Me, I didn’t find any. But Paul did: he held his speck of gold like a mote of dust on his fingertip for about 5 minutes before it somehow disappeared. The end of another wonderful fortune. Apparently there are still real nuggets to be found up there. But not very often.

And yes, we did see a couple of places which Marcello the driver claimed had been used as settings in the filming of LOTR. Of course, the whole amazing range of The Remarkables, which feature so often, snow-covered and in summer, as the Misty Mountains. But also, the bend on the Arrow River which had been the Ford of Bruinen, where Frodo escaped from the Black Riders… 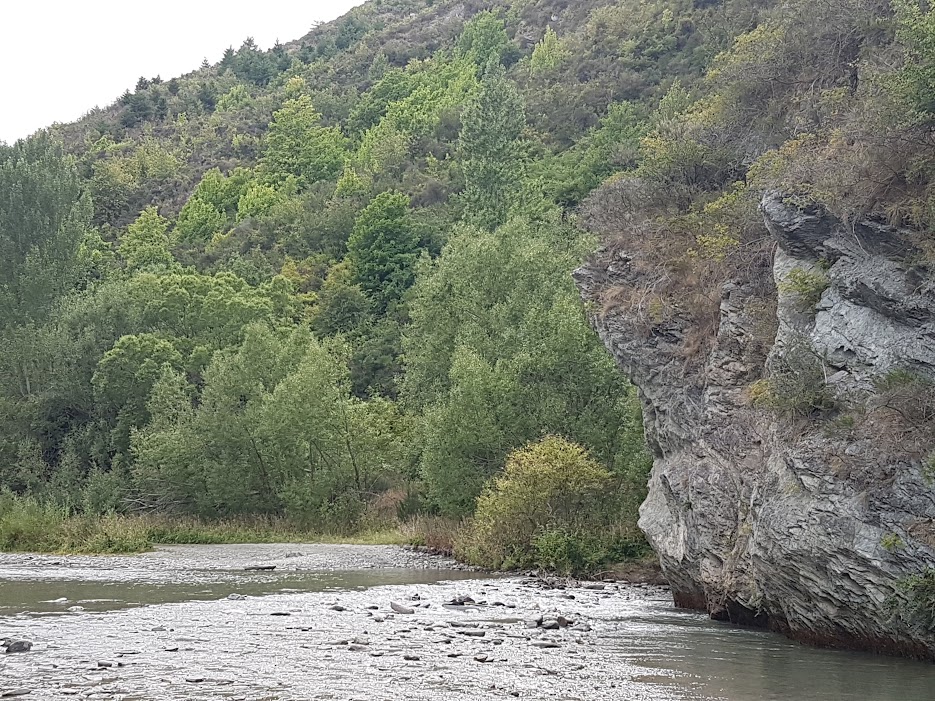 the place where Aragorn fell in the battle with the Warg Riders… (You have to use your imagination here: it’s the little edge just beyond that clump of trees in the foreground.) 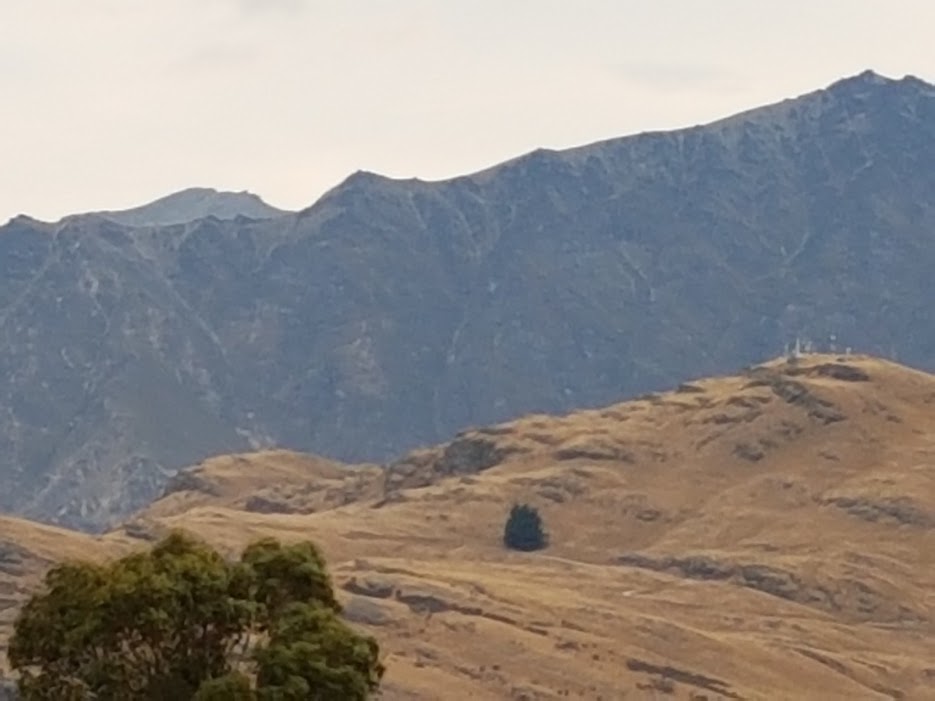 But really, the landscape is so splendid that it’s easy to imagine yourself there in the story. I don’t know how much Peter Jackson has been worth to the New Zealand tourist economy. Much more than his weight in gold, I would think.

After the tour I met up with Alison at the Kiwi Birdlife Park, and we took the Skyline gondola to the top, to enjoy the view of the city, the lake, and the mountains. Selfie! 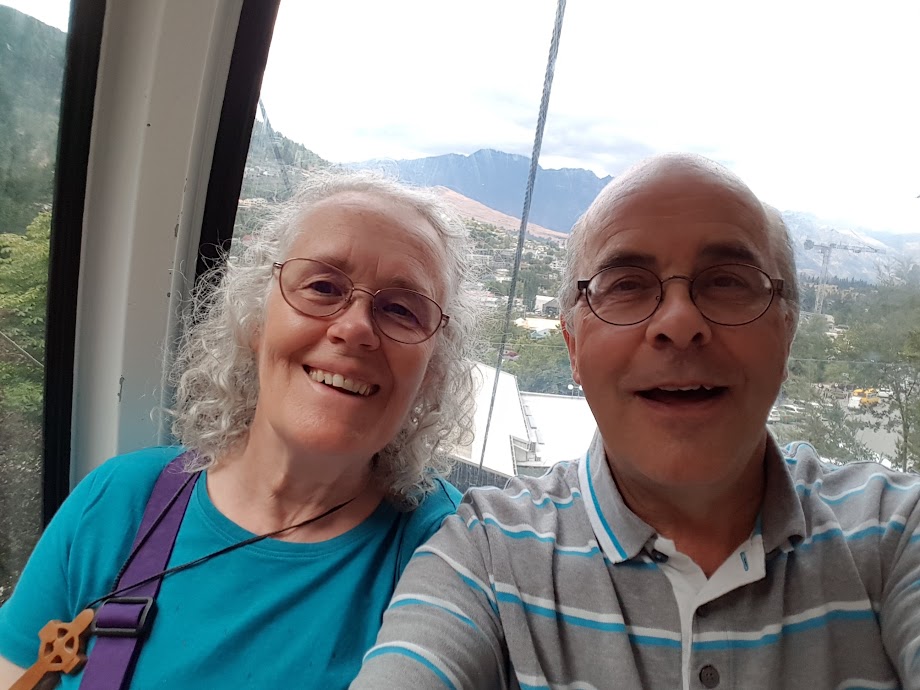 And in the evening, another of Queenstown’s attractions: a cruise on a 100-year old steamship, the TS Earnslaw, which took us to the other side of the lake for an evening meal and a demonstration of sheep-shearing. The excursion includes some olde-time community singing on the way home. Hmm. My old dad would have loved it.

And here’s a thing about South Island. We had saved our warmer clothes, thinking it would be cooler when we got this far south. Instead, they were “enjoying” unprecedented temperatures in the high 30s C. Hotels in South Island don’t have air-conditioning: they never need it. So we had a few nights of poor sleep because of the heat. A problem we had not expected.