Leaving Nelson on Monday morning (bags out at 0700, depart at 0800) we began one of our longest days on the road, travelling down to Christchurch. Christchurch is almost directly south of Nelson, but since the 2016 Kaikoura Earthquake (the second largest earthquake in New Zealand since European settlement began) it’s impossible to take the SH1 highway down the east coast. Instead we had to set off south-west on SH6, then south on SH65 through Victoria Forest Park, then south-east on SH7 before rejoining SH1 at Waipara. It’s a total distance of over 420 km, which Google Maps reckons takes 5 hours 13 minutes, but I guess that would be by car rather than in a 53-seater coach. Much of this route is not designed for the heavy traffic that has been forced to take this diversion since the earthquake, so there were many twists and turns and roadworks along the way.

Although we had various photo stops to look at the view, I didn’t take many photos. Here are some trees, mountains and clouds, 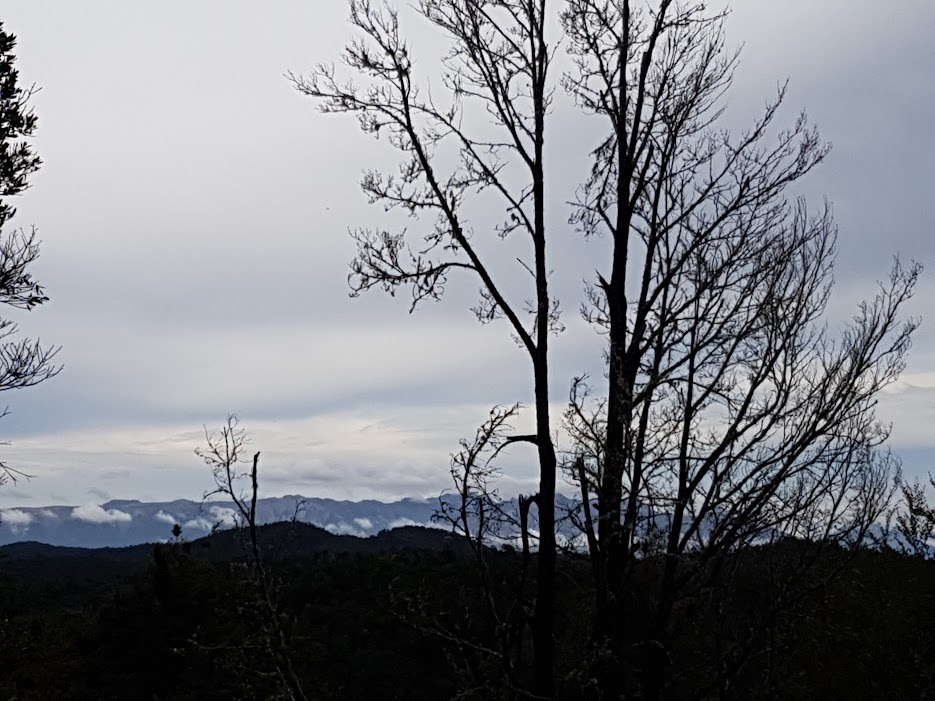 and here is one of the many ‘braided rivers’ that are so characteristic of New Zealand’s landscape. 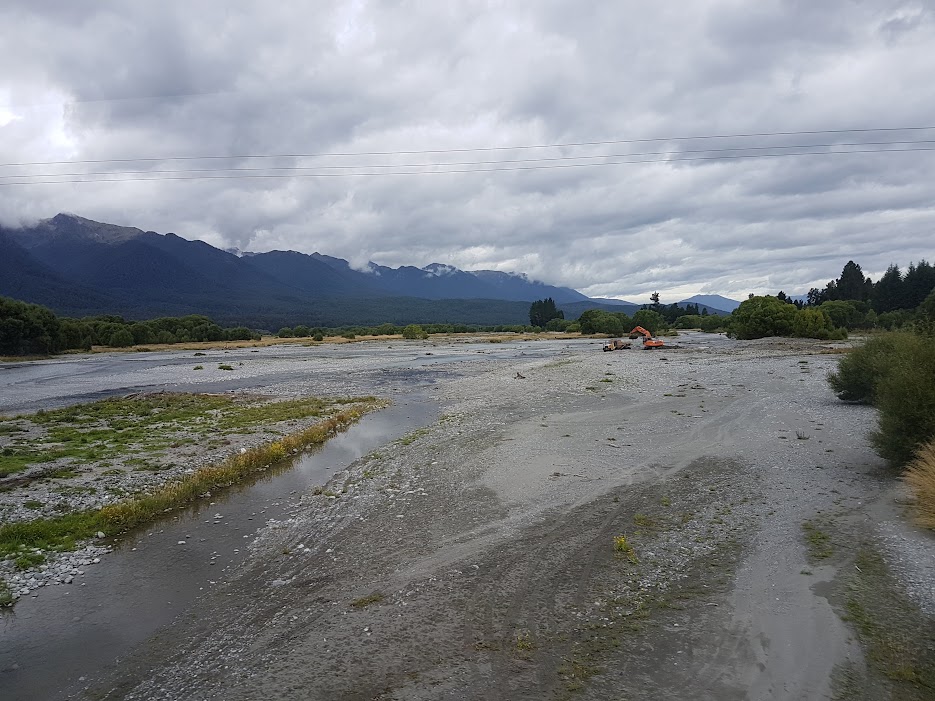 It’s the kind of place I imagined seeing the refugees from Rohan crossing. Instead, there’s just a big orange digger out there in the distance.

When we reached Christchurch, everyone was a bit tired and crotchety. But Alison and I were very keen to try and get into the city centre and have a look at the ‘cardboard cathedral’ which we had heard about when Bishop Victoria spoke to the Oxford Diocesan Clergy Conference in 2014. We knew that we were scheduled to return to Christchurch later in the tour, but we weren’t entirely confident about how much the itinerary at that point might allow us to see. So we decided to walk into the city centre – which turned out to be 4.9 km, and took about an hour. It wasn’t helped by the fact that, as we neared the city centre, there were more and more road closures and diversions where work was still going on to demolish, repair and rebuild in the aftermath of the 2011 Christchurch earthquake. But we found our way to Cathedral Square, where what is left of the original Cathedral stands temporarily derelict. 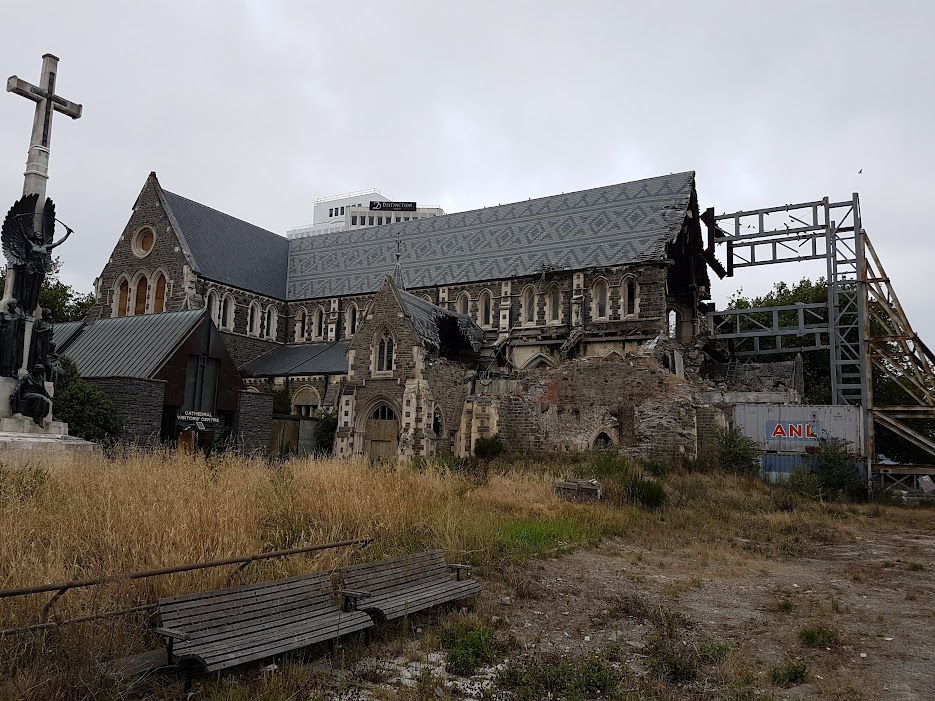 Then we continued to the site of the transitional cathedral AKA cardboard cathedral. We had hoped it would still be open – the guidebook we had looked at said it was open till 7 p.m. in the summer. The guidebook was wrong! It closed at 5 p.m., and the custodian had just set the alarms and locked up. 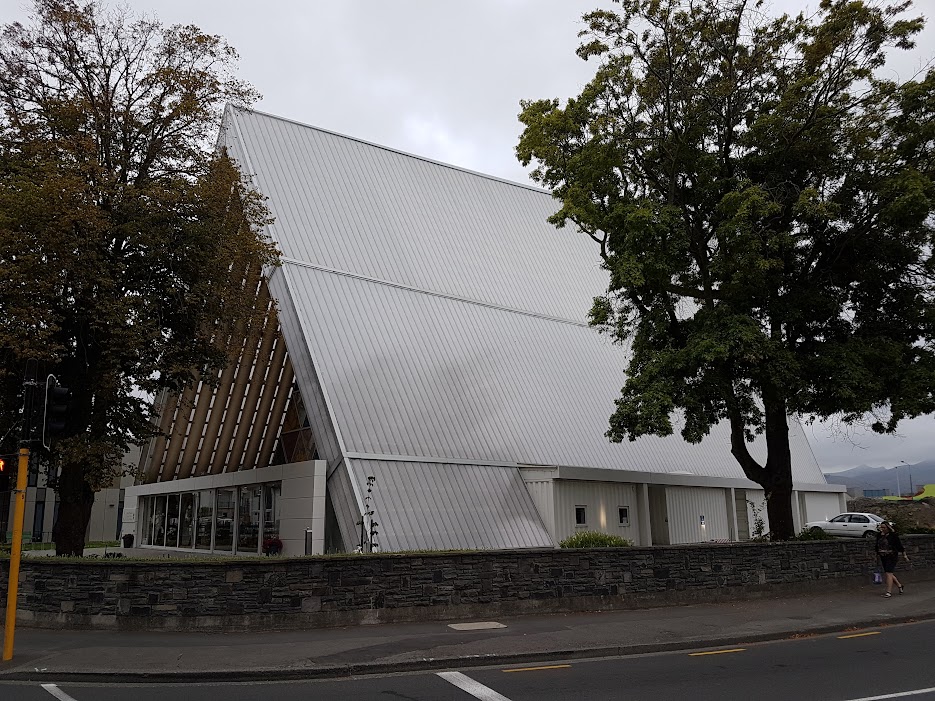 Ever since 2011 there have been heated discussions about what to do with the old Cathedral. We got the impression from Bishop Victoria that she might have been of the party which wanted to demolish it completely and build something new. But the heritage faction, who wanted to rebuild the old Cathedral exactly as it was (it is, after all, 130 years old!) appears to have won the day. Perhaps if the original Cathedral had been more thoroughly destroyed they might have been able to do something like in Coventry? – building a modern cathedral alongside the ruins of the old, as a reminder of… well, in this case, the forces of Nature, perhaps?

The custodian gave us a lift part of the way back to the hotel, for which we were very grateful after the long day of travelling.