The roads in New Zealand are like those in Britain in that they drive on the left; unlike, in that they measure distances in kilometres.

On the next day of our adventure we covered fewer kilometres, but saw a lot of new things. The first part of the drive from Cambridge took us further across the Waikato region, and especially through the Matamata district, an area of rolling grassy hills that looks uncommonly like the Shire. In fact, it was the Shire in the LOTR movie. For copyright reasons, all the sets for the movie had to be dismantled when filming was completed: the only set that remains is the Hobbiton Movie Set which is close to Matamata. Sadly, it wasn’t on our itinerary – it turns out to be an expensive option for a visit – but we were able to visit the office and have our pictures taken with Gandalf: Our way went ever on and on to Rotorua (which is Maori for Lake #2). A strong wind was sweeping across the lake, which made our lunch break a cool and blowy occasion. In the gardens of Rotorua we enjoyed the municipal flower gardens, and a more-English-than-the-English croquet tournament in progress. I never knew there were such things as croquet pros, like the pro golfers. I do now.

Rotorua is known for its thermal activity, with super-heated steam escaping from cracks in the ground in random places all over town. Near the lake is St Faith’s church, modelled on, and decorated in the manner of, a traditional Maori meeting house. The side chapel window shows Christ dressed in a Maori cloak, appearing to walk on the water of the lake beyond. Because of the thermal activity, conventional burials are impossible so the dead are interred over-ground, as they are in parts of Italy, New Orleans and other exotic places. If you bend over and touch the ground in the churchyard, it’s hot. 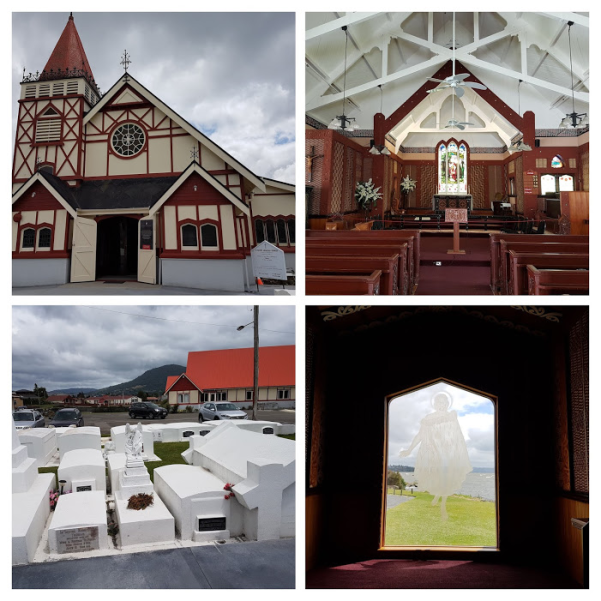 Our afternoon visits took us to the Te Puia Maori cultural centre and geothermal valley with the spectacular Pohutu geyser and the bubbling mud pools. The high winds meant we didn’t see the geyser attain its full height, but it did well for length, soaking visitors over quite a wide area. In the evening we enjoyed a hangi or aori feast at the Whakarewarewa Village. The food cooked underground by the geothermal heat, and informative talks and entertainment by many of the local people. Highlights: the men of our party called to the front to perform the haka, and the very camp Maori in the lineup who reminded you of Frankie Howerd. Was he deliberately ‘sending up’ the whole performance, was it part of the act, or was he genuinely a third-gender person, like the Two-spirit people among indigenous North Americans? As Grandpa knows, there are more questions than answers…