Last week I spent four days on retreat at Mucknell Abbey. Why does a retired vicar even need a retreat? I hear you ask. Isn’t the whole of his life one long retreat? Well, yes and no. I may be much more the master of my time, than I was when I was a working vicar; but there are still all sorts of ways in which the business of ‘everyday living’ can feel as if it gets in the way of being able to think about God, and spend as much time thinking about God, as you might like. Also, I’ve found myself spending the odd idle moment asking myself, What am I actually supposed to do, now that I’m nothing but some superannuated old priest?

Mucknell Abbey is one of my favourite places to be in the whole world. Just a few miles from Worcester, it’s the home of a community of Anglican Benedictines, men and women, who devote themselves to living and praying according to the Rule set out by St Benedict 1,600 years ago. They used to be at Burford Priory, but when that property became too expensive for them to maintain, they sold it and moved to their new, purpose-built monastery, in 2010. There are 12 members of the community, including two novices, and their number is sometimes augmented by a few ‘alongsiders’: young people who have chosen to share the community’s life for a short period of time. If you want to know more about them, have a look at their excellent website. 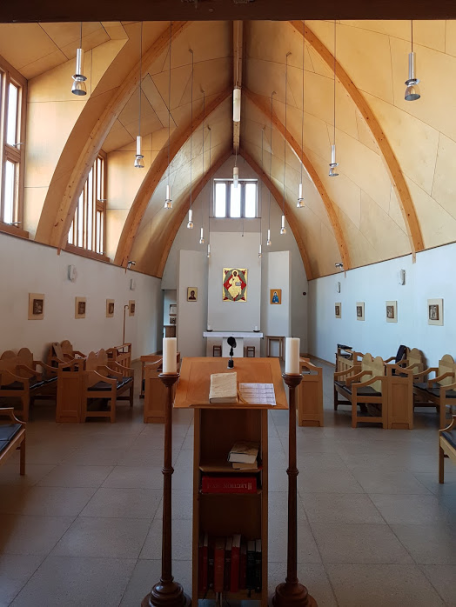 Staying at Mucknell, even for just a few days, is a spiritual tonic. Sharing in the community prayers six times a day (I never managed the seventh, the Service of Readings at 6 a.m. each day), enjoying their simple but ample (mostly vegetarian) meals, and lots of hours to read or think or wander around the grounds up there on their windswept hill.

Perhaps I hoped for some dramatic revelation, a flash of light and the voice of God telling me exactly what I have to do. One always does hope for that. Or maybe not. Instead of that kind of drama, something much better happened. In my thinking alone, and my reading and praying, and the Offices, I began to discern a common theme, which was about God being present, and near. (In fact the Rule of St Benedict has a lot to say about God being present everywhere and anywhere.)

You know how it feels if you’re in the same room as someone you really love and admire but you maybe don’t know very well – perhaps a celebrity or popstar or some other kind of hero – and they look at you, and your heart jumps? It was a bit like that. I got the sense that God was there, and that God looked at me. Not with reproach or blame or anything scary like that – it would be possible I suppose to feel terrified by the thought that God was looking at you. No, this look was with interest, and love.

While I was away, Alison posted a picture of her visit to youngest grandson Jerm. It somehow became a lovely kind of icon for me, that described my week at Mucknell. In this icon, God is represented by Alison, and me by Jerm. We’re involved together, we’re looking at each other, we’re playing together, we’re having fun.

That’s kind of how the spiritual life should be. Hang it all, that’s how life should be, and how St Benedict sets out to regulate it so it can be. Living with God, being with God, sharing God’s deep joy in all things. I’m really hoping to bring that sense home with me and hold on to it as the special revelation that God did indeed give during my retreat.