Hand on heart, I have a terrible confession to make. I have been one of those — and we are many, many — who have been secretly wondering if democracy is such a great idea after all. When we see Donald Trump in the White House, and the United Kingdom set on a collision course with the iceberg of a no-deal Brexit — all as a result of the democratic process — aren’t we bound to ask ourselves that question?

They’d all be disenfranchised, and because it was their own fault, there would be concomitant small curtailments of their civil rights. You see how it begins? I’m already ten steps to becoming a Fascist dictator! 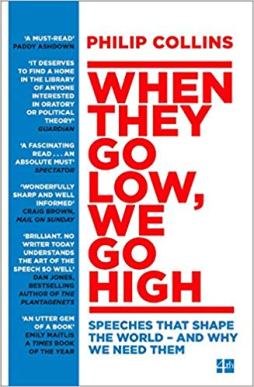 So it’s great that Philip Collins has written When They Go Low, We Go High, published last year by 4th Estate, and surely not well enough known. It’s quickly rising up my list of Books That Everyone Must Read (especially if they want to be permitted to vote). (No!) Its subtitle is ‘Speeches that shape the world – and why we need them’. Philip Collins is a journalist, and was chief speechwriter for Tony Blair from 2004 to 2007. Though I’m trying hard not to hold that against him. But chiefly, he is passionate about democracy. This book is all about his conviction that liberal democracy is not only the best form of government, but the only one that really makes human flourishing possible. But he freely admits that democracy is in crisis, endangered on many fronts; though this is also nothing new. Perpetual crisis and danger seems, in fact, to be the permanent state of democracy.

The book quotes and analyses many of the most important speeches that have been made all down the ages, from the time of Pericles to Barack Obama, about the importance of government ‘of the people, by the people, and for the people’. The list includes Cicero, Lincoln, Kennedy, Churchill, Reagan, Elizabeth I, Mandela, Aung San Suu Kyi, Martin Luther King among others. Alongside the extensive extracts are Collins’s comments about how each speech works, what makes it great and important, and why it matters.

Among the greatest dangers currently facing democracy is populism. On this, Collins writes (p.81)

Populism begins with recriminations about the governing elite and, to use Donald Trump’s extraordinary allegation, their ‘criminal enterprise’. It ends with recriminations about the constitution. All the while it claims to have special knowledge of the will of the people. It is a fraud from start to finish. Plato hated democracy because he thought it led to populist rulers. There is a risk, if we do not find the words to advertise the virtues of conventional politics, that Plato’s anguished prediction will be proved right. The task for the responsible democrat is therefore to describe what has gone awry and find words for a better future, like the wonderful writing in Jefferson’s 1801 Inaugural Address and the compressed poetic expression of Lincoln’s address at Gettysburg. The solution to disenchanted politics cannot be populism. It has to be better, more enchanted politics.

I realise, reading this, that I had fallen from grace, become a backslider with regard to my faith in Democracy. I repent and recommit, and hope to make amends. But that means that, just as the subtitle of this blog pleads for a re-enchanted Church, so my citizenship pleads for just that re-enchanted politics.