“There’s a good chance,” Denis replied. “We could get lucky.”

Apparently, this isn’t the case with every tourist group. It’s all too easy for low cloud or any poor visibility to hide the highest peak in New Zealand so completely that it’s invisible even (especially?) from just a few miles away. 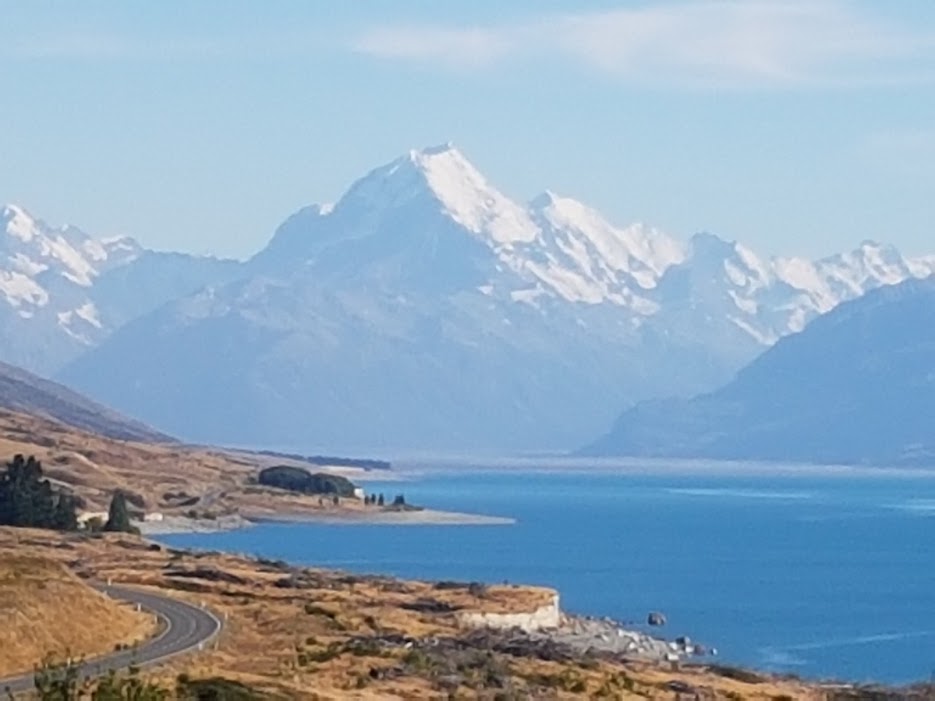 We did get lucky. As we drove along the shore of Lake Pukaki, we had splendid views of Mount Cook which grew bigger and bigger as we got nearer. We stopped at the Hermitage Hotel for a morning break, with excellent views from the cafe terrace. Then back to the coach, past Lake Pukaki and on to Lake Tekapo for what is apparently an obligatory stop at the Church of the Good Shepherd. It’s a picturesque little stone building in a beautiful location: the east window of clear glass looks out over the lake to the mountains beyond. It’s supposed to be a place of prayer and worship, reminding people of the original settlers of this land, but also of the glory of God. Somehow I couldn’t get beyond the tourist rip-off factor. An attendant abruptly reminds you that no photography is allowed – unless you’re a professional photographer, when you will be allowed a 30-minute shoot for a mere $100. Hmm. Crowds of camera-wielding visitors can indeed detract from the holy feeling of a place. But not as much as what feels like an exaggerated commercialism.

The road then took us through the Mackenzie Country, then over Burke’s Pass, stopping at Geraldine for lunch, where we found the congregation of St Mary’s church sharing a church lunch, and happy to greet us. Then on, on, on over the Canterbury Plains, and so at last to Christchurch again.

They were getting ready for a service to mark the beginning of a new school year, for which children and parents were gathering, so we had only a few minutes to look around and take a couple of photographs.

Behind the Cathedral is the memorial to the 185 victims of the 2011 earthquake, a moving sight which includes baby seats and wheelchairs representing the children and disabled who lost their lives.

Other notable views of Christchurch included the ruined original Cathedral. There’s been a lot of debate about whether to build a completely new, 21st century cathedral, or to rebuild the much-loved Victorian building. It seems the conservationists have won out over those (including the Bishop) who wanted something more appropriate for contemporary worship and witness.

And the Container Mall, where colourful shipping containers were brought in as soon as possible after the earthquake, to get the city’s commercial and business life up and running again. It’s such a feature, that as some of the shops return to rebuilt premises, other businesses are starting up in the vacated containers. I wouldn’t however recommend the container public toilets… in temperatures that were still in the upper 30s Celsius, these were not a comfortable experience.

Even though we spent so few hours there, we loved Christchurch, reputedly the most English of New Zealand cities. And so the last day of our New Zealand holiday drew to an end.